In this report, various price thresholds will be used for the luxury home designation, depending on when the chart was first created, if different property types are being combined, or simply to look at the high-end market from slightly different angles. If the luxury segment is defined by the top 10% of sales, then the threshold in San Francisco for houses was approximately $3 million in 2016, and for condos, between $1.85 and $1.9 million. However, due to the essential relation of location to value, $3 million might buy you a large, gracious, pristine house in one neighborhood, and an uninhabitable fixer-upper in another. As always in real estate, the devil is in the details. 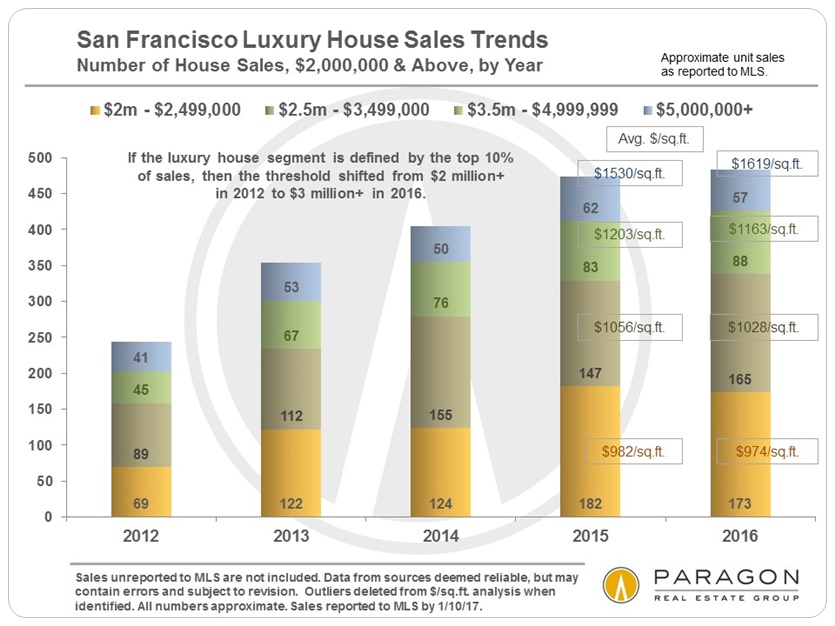 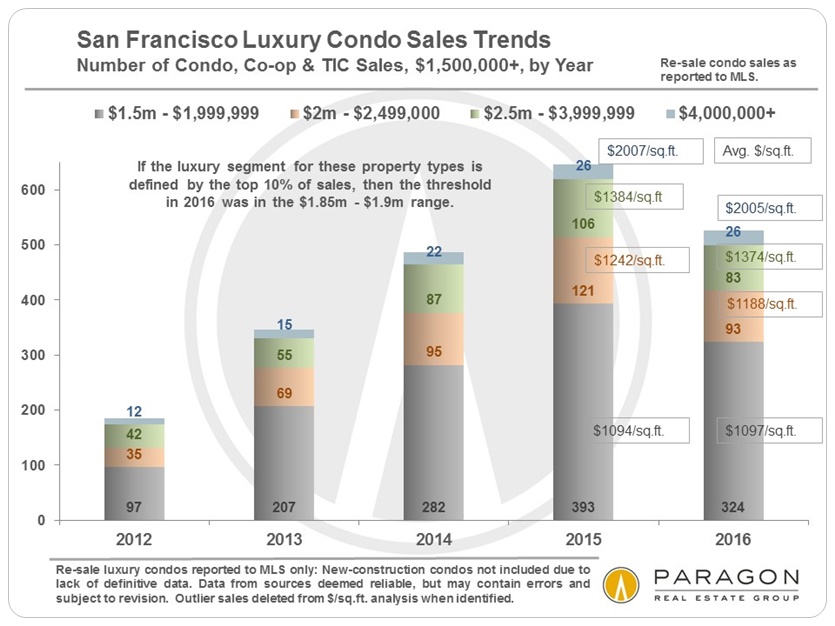 
The luxury real estate market is impacted by a number of factors: positively, by improvement in general economic conditions and confidence, highly-paid employment and population growth, and especially, by the creation of new wealth in large quantities. All these elements were dynamically present in the Bay Area from 2012 through mid-2015. Then significant economic and political volatility put down a damper, pretty much across the board. Chinese stock market turmoil, the crash in oil prices, Brexit, the U.S. presidential election, as well as an apparent cooling in our high-tech boom, all injected uncertainty into financial markets and our local luxury real estate market. Furthermore, Bay Area high-tech IPOs, which had created a stupendous amount of new wealth since 2011, basically dried up – and newly rich or substantially enrichened buyers had played a big role in demand. All this was accompanied by a surge in the construction of new, luxury condo projects in San Francisco, producing a considerable increase in supply, just as demand appeared to be softening.

The luxury market began to cool, with significant, but not cataclysmic adjustments in the standard measures of supply and demand. (The most affordable house segments around the Bay Area continued to rock and roll last year.) Most affected over the past 16 months was the market for re-sale luxury condos, particularly in those districts where big, new-construction projects are concentrated. Their sales appreciably decreased, with some decline in values. It is hard to get definitive data on new-project sales activity, but it is believed to have softened as well with the increase in competitive listings.

While inventory grew, the number of high-end listings, both houses and condos, expiring without selling jumped, a clear sign of supply outpacing demand, sellers looking for more money than buyers were willing to pay, or both.

However, there has been nothing approximating a crash and, all in all, demand held up quite well considering all the circumstances at play. So far, price declines have been relatively minor; there was no falloff in high-end house sales, in fact those selling for $3m+ hit a new peak last October. And some smaller and medium-sized luxury condo projects in the Pacific Heights district saw brisk sales at high prices, this being a highly prestigious area where new construction is relatively rare. Even with some cooling in the high-tech boom and the dearth of new IPOs, the local economy persists as the envy of the world, and an astonishing amount of wealth yet remains in the Bay Area.

If local companies such as Uber, Airbnb, Pinterest and Palantir go public, it could recharge demand as the new-wealth machine starts minting new millionaires once again. On the other hand, how the foreign luxury home buyer will react to political changes both here and abroad is uncertain. For that matter, with all the wildly moving parts currently in local, national and international politics and economics, it is difficult to make predictions with any sense of certainty. However, Ted Egan, chief economist for the city of San Francisco, puts the odds of a new recession at 10% or less. 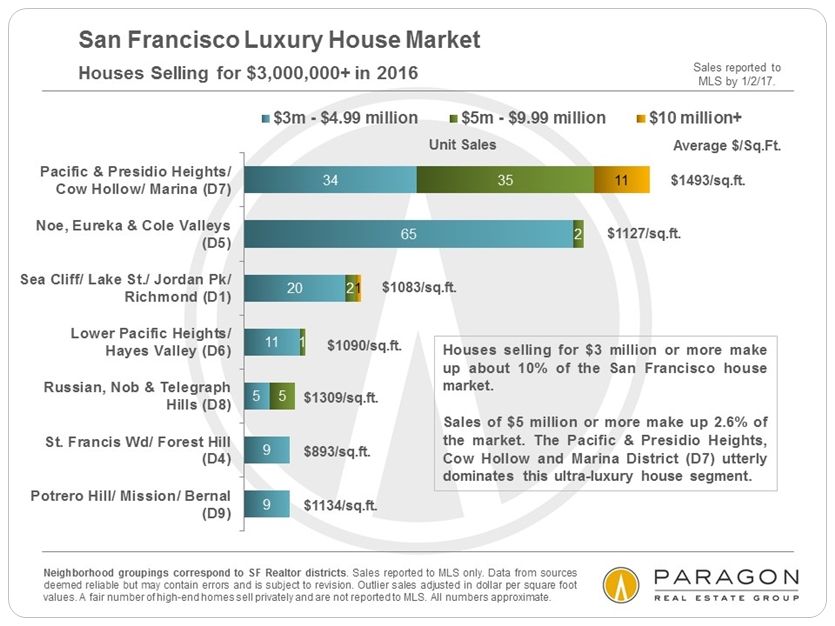 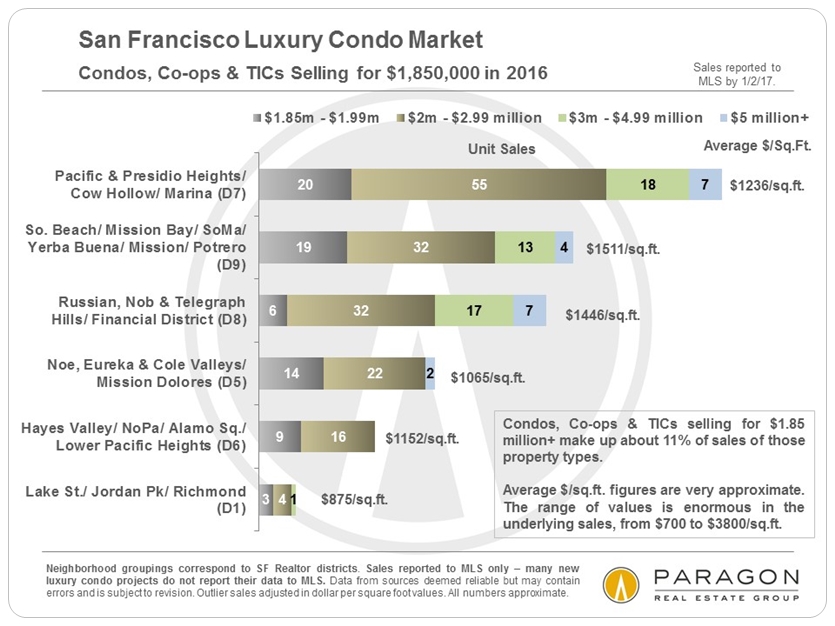 Average dollar per square foot values ticked down in 2016 for both high-end houses and condos after years of appreciation, but still remain historically high. Of sales reported to MLS, 10 houses and 34 condos and co-ops sold for over $2000 per square foot; 6 sales reported values over $3000 per square foot. These sales were concentrated in the Pacific Heights district, Russian & Nob Hills, and South Beach & Yerba Buena. Average dollar per square foot values should always be considered gross generalizations, since there is such a wide variety of homes of differing locations, sizes, conditions, eras of construction, views, lot sizes, and so on. Square footage can also be measured in different ways and not all sales even report square footage. 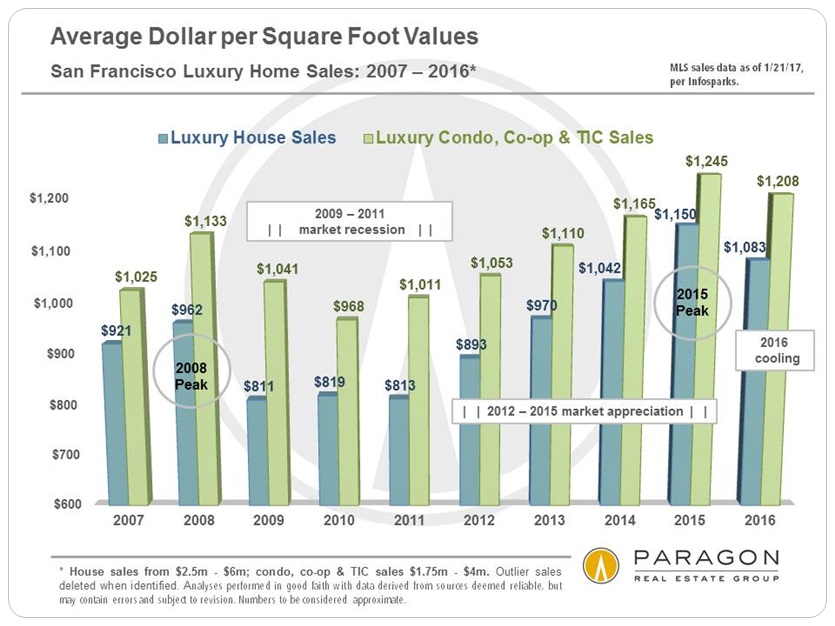 In many of the charts following in this report, not only are longer-term trends in supply and demand illustrated, but also the extreme seasonality of the luxury homes market in San Francisco. Activity climbs through spring, slows in summer, spikes in the short autumn selling season, and then plunges during the mid-winter holiday season. Among other things, the seasonality of this segment significantly affects monthly and quarterly median sales prices in the city as the number of expensive home sales ebbs and flows so dramatically.

As noted at the beginning of this report, the price thresholds for the luxury home designation sometimes vary from chart to chart, for the reasons previously mentioned.

New Listings Coming on Market
A long-term view since 2006 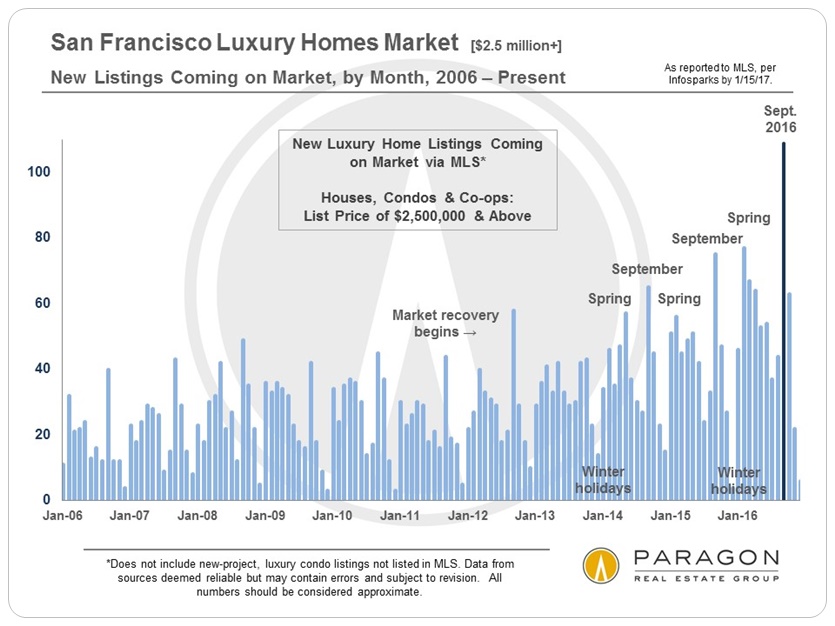 Monthly Number of Active Listings
Since 2014 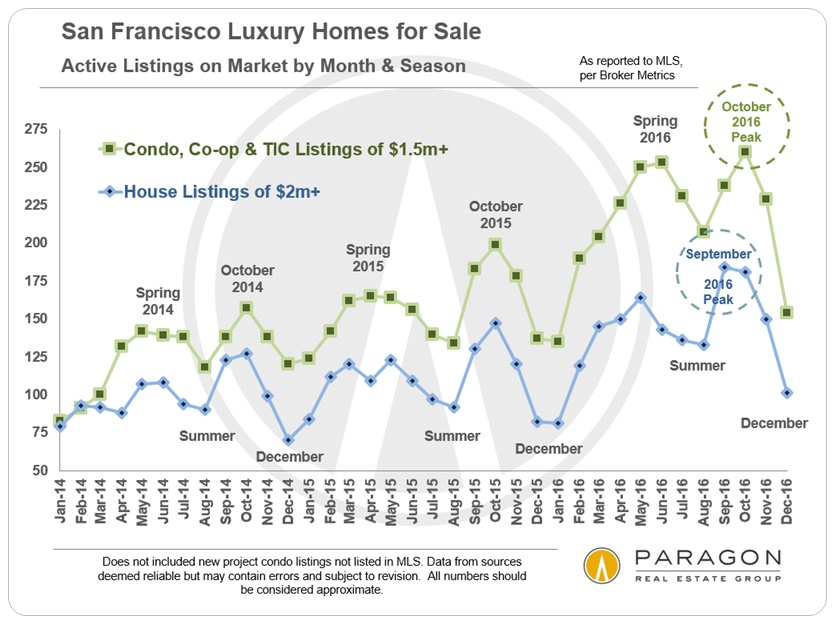 Listings Accepting Offers by Month
Since 2014 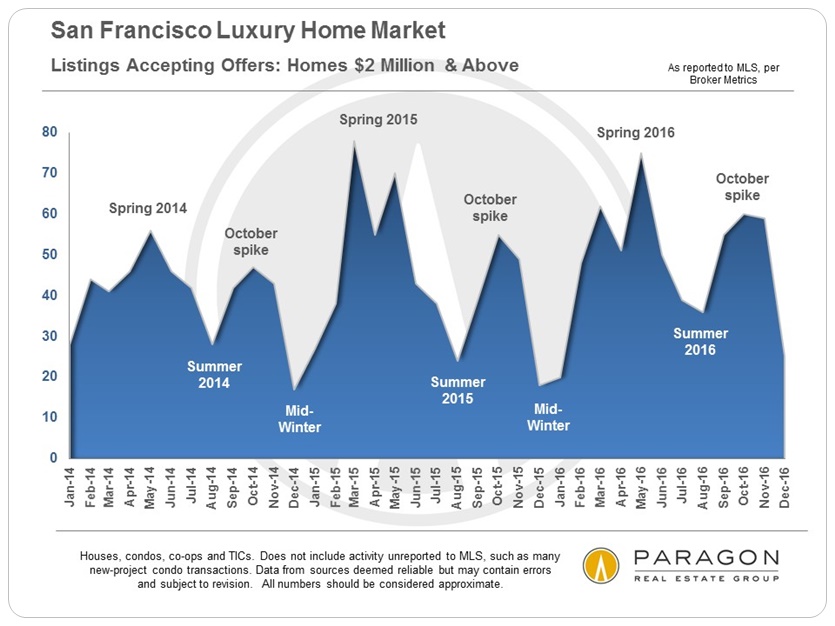 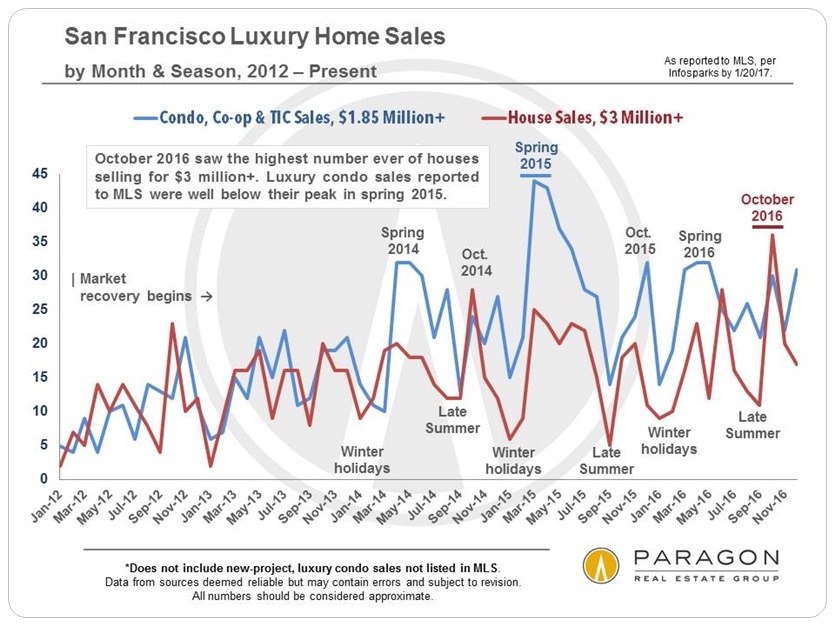 In many of the following graphs, the cooling of the luxury market in the city in 2016 is illustrated. The changes are significant, but should not be overstated: The market cooled from being characterized by overheated demand and inadequate supply, to something approaching a more normal balance between buyer and seller. So far, there has been neither a crash in demand nor in prices.

Months Supply of Inventory
by Year and by Month 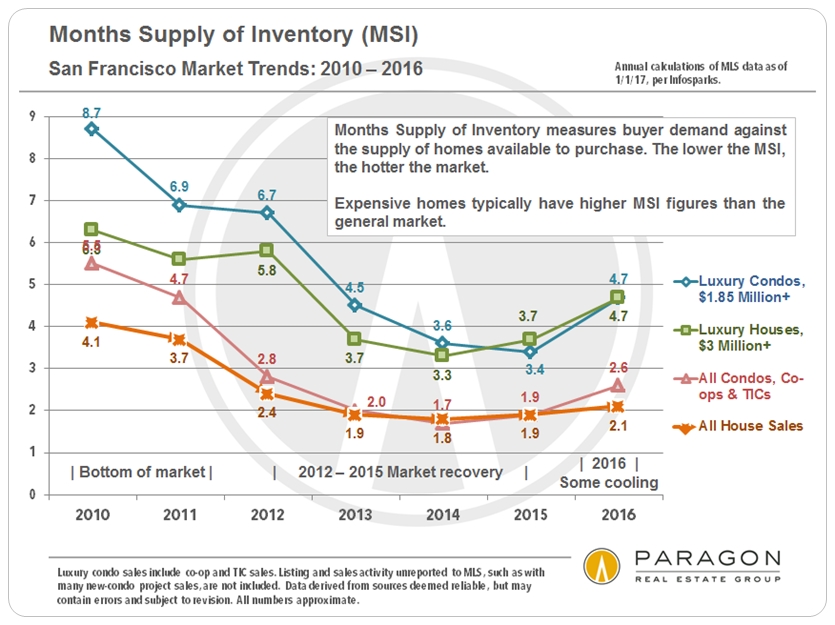 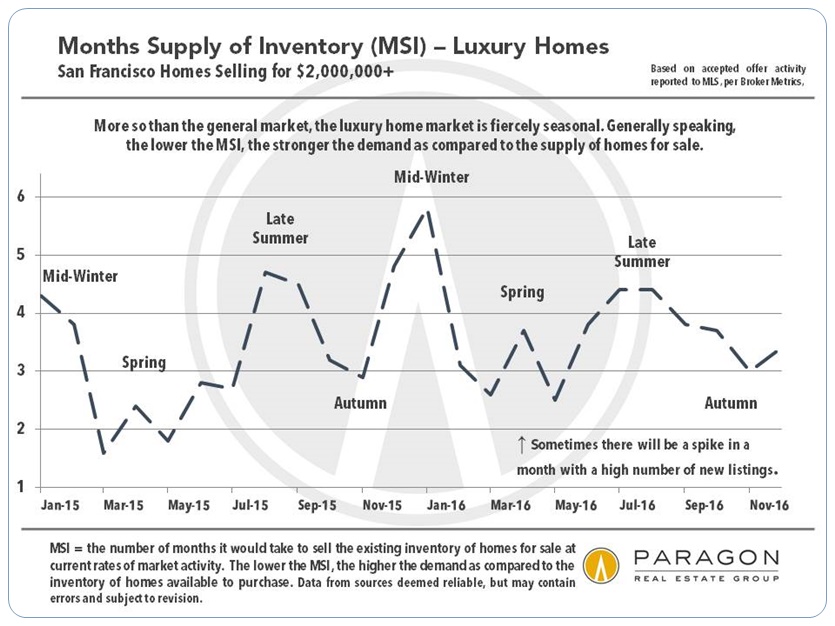 Sales Prices to List Prices by Year and by Month 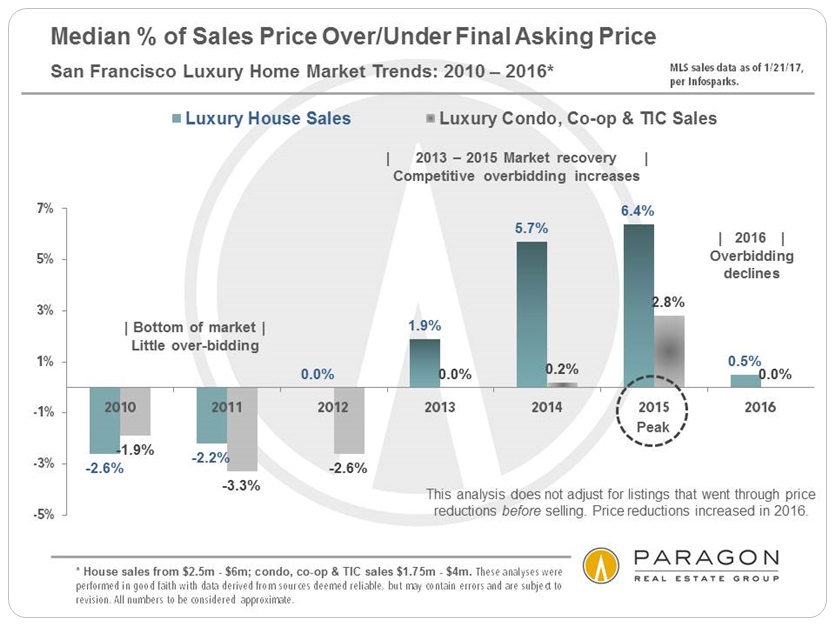 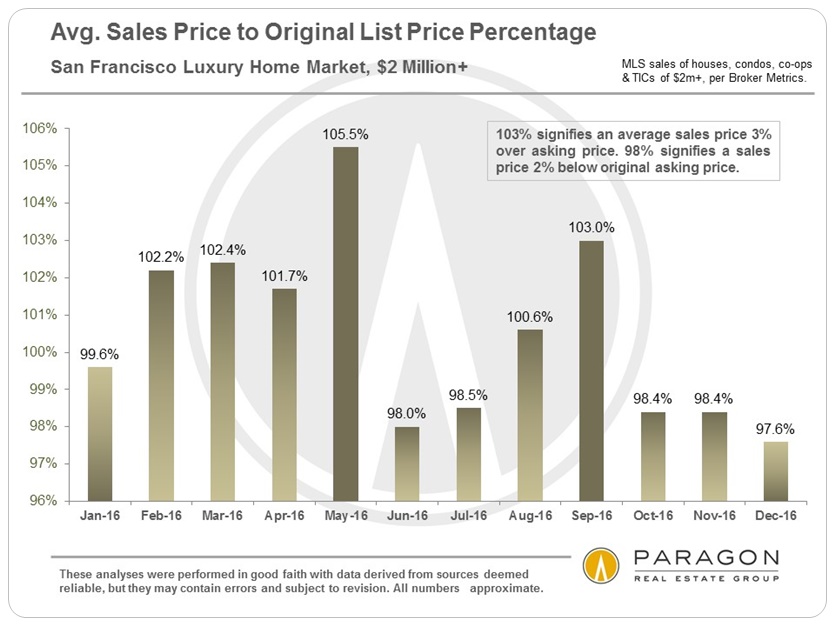 Percentage of Listings Selling Over List Price by Year 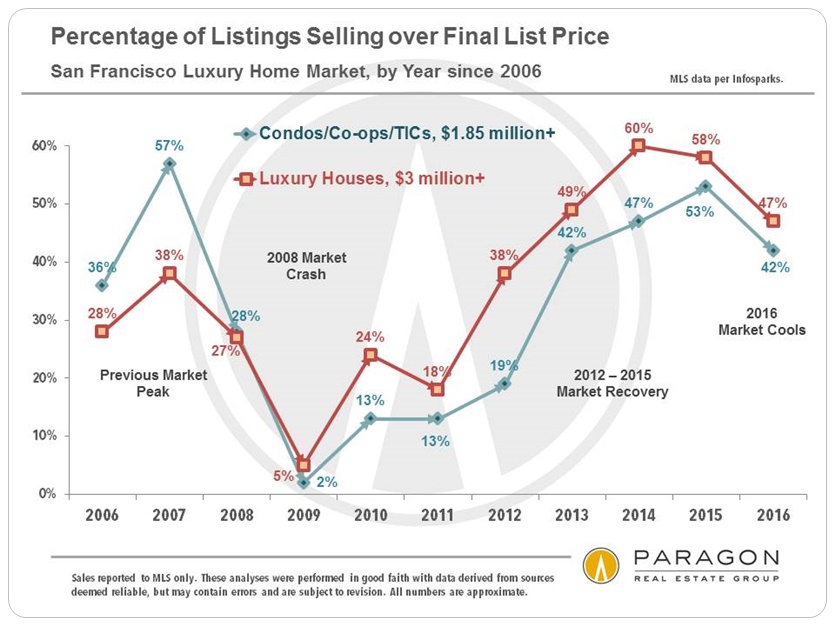 Average Days on Market by Year 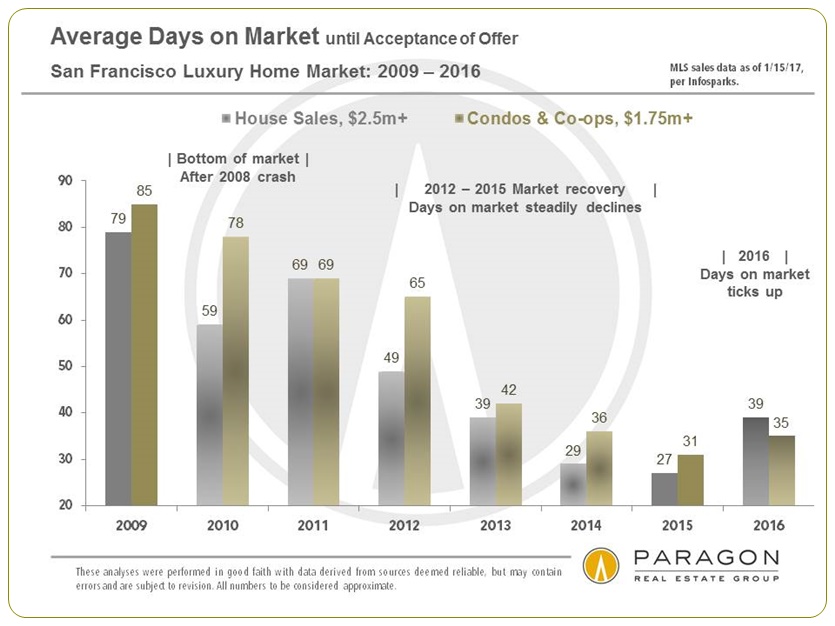 The luxury market has always been more prone to egregious overpricing than the general market: Perhaps this simply goes along with fabulous homes in high prestige locations, but it sometimes results in price reductions in the multi-millions. As the market frenzy has cooled, pricing correctly has become ever more important: Overpricing often has significant negative ramifications for sellers, including the possibility of no sale occurring at all – something occurring with greater frequency. As the supply and demand dynamic has shifted, buyers are competing less, negotiating more aggressively, and walking away from listings they see as significantly overpriced.

Luxury House Sales
With and Without Price Reductions 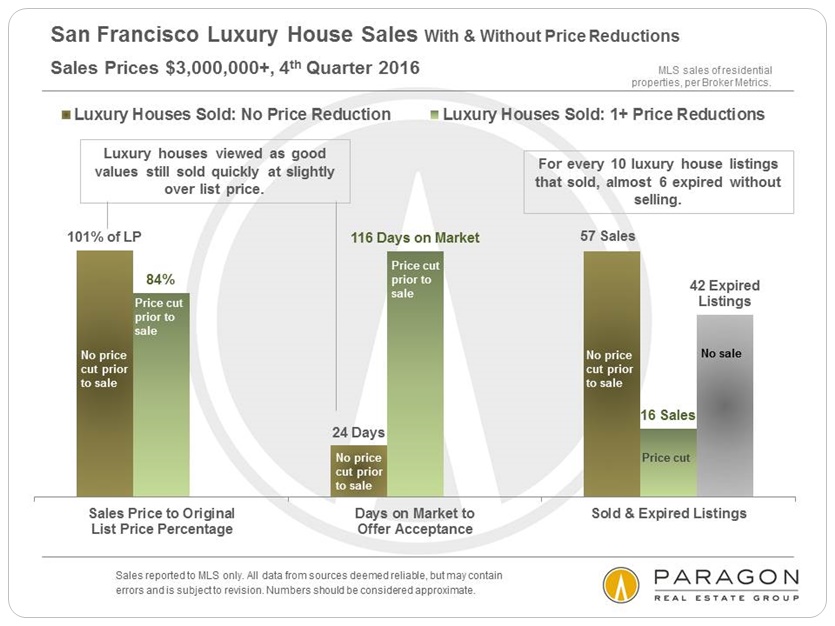 Luxury Condo Sales
With and Without Price Reductions 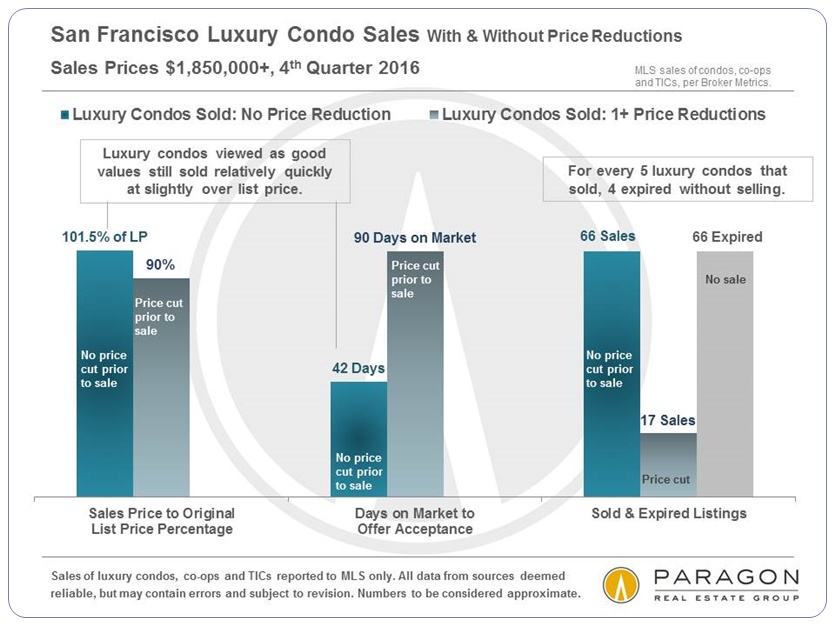 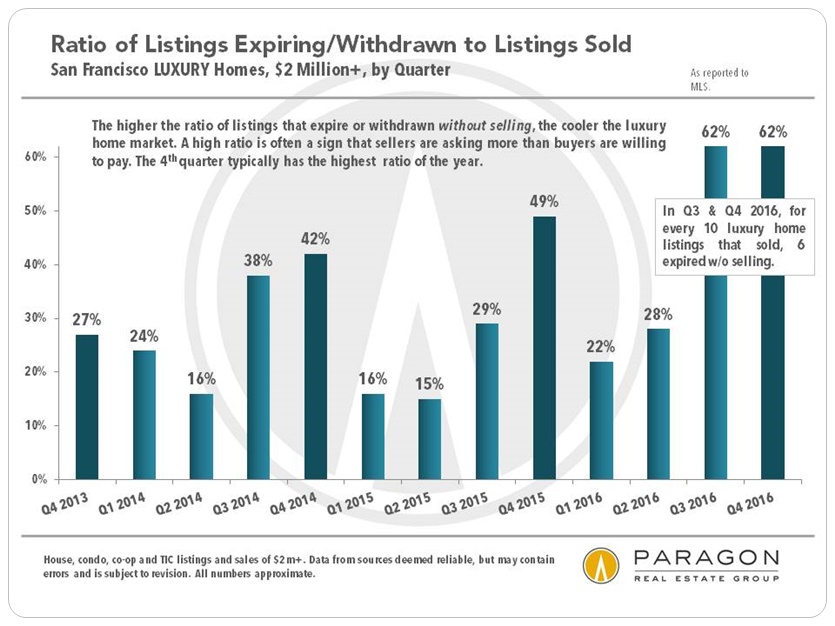 It is impossible to know how general statistics apply to any particular home without a specific comparative market analysis, which we are happy to provide upon request. Please call or email if you have any questions or need assistance in any way.

*These analyses were made in good faith with data from sources deemed reliable, but may contain errors and are subject to revision. It is not our intent to convince you of a particular position, but to attempt to provide straightforward data and analysis, so you can make your own informed decisions. Median and average statistics are enormous generalities: There are hundreds of different markets in San Francisco and the Bay Area, each with its own unique dynamics. Median prices and average dollar per square foot values can be and often are affected by other factors besides changes in fair market value. Longer term trends are much more meaningful than short-term.