One of the great charms of San Francisco is the wonderful variety of architectural styles that grace our streets – it’s not unusual to see half dozen distinct types of architecture on a single block. Here is a brief overview of the Victorian and Edwardian eras of home architecture with which the city is perhaps most identified – though, of course, many beautiful homes and buildings have been built since that era, and continue to be built.

The text, chart and photos are all courtesy and permission of the San Francisco architect James Dixon: James Dixon Website. We are most grateful for his generosity in allowing us to use them. 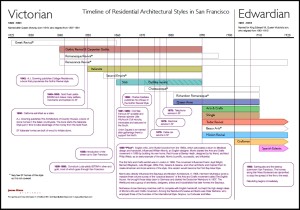 Victorian-Edwardian Timeline
This is a fascinating timeline of the different styles of architecture that will be discussed in this piece, created by Architect James Dixon. It can be a little difficult to read, but is easier to decipher if you adjust your screen-view zoom larger. It can also be found online at James Dixon’s website. 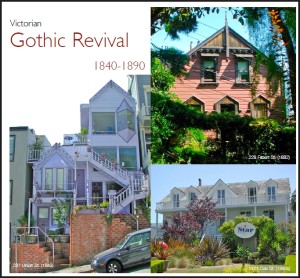 Gothic Revival: 1840 – 1890
The publication of Cottage Residences by Andrew Jackson Downing in 1842 became the spur for the Gothic Revival style in America. The residential offshoot, called Carpenter Gothic, used wood rather than stone and eschewed gargoyles and stained glass in favor of simpler ornament. Although some of the more extravagant homes may qualify as Gothic Revival, most can safely be called Carpenter Gothic. Characteristics of this style include pointed arches over doors and windows; steeply pitched roofs: turrets, pinnacles, crenellations; and leaded glass windows. 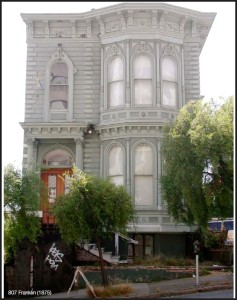 Victorian Italianate: 1850 – 1890
In 1850, Andrew Jackson Downing published The Architecture of Country Houses. which popularized a new style: Italianate. The house at 807 Franklin is an elaborate example of the style, exhibiting many of the hallmark characteristics: quions along the edges; tall, narrow windows with rounded tops, porch portico, a slanted bay window, classical columns and pilasters, as well as the look of a building that should be made out of stone.
Additional Photos 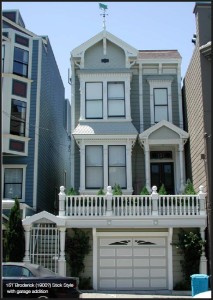 Victorian Stick: 1860 – 1890
These houses have long, thin pieces of wood, called “sticks,” applied to their surface, especially at corners. These sticks are meant to be both decorative and expressive of the underlying wood framed structure. In the 1870s these decorative elements became exceedingly numerous and elaborate. Homes in this new vein were called Stick Eastlake, which is actually a misnomer since Charles Eastlake, from whom the name derives, abhorred excessive ornamentation. San Francisco has the greatest concentration of Stick and Stick Eastlake style homes in the world.
More Photos 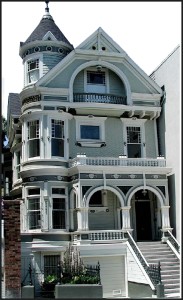 Queen Anne: 1880 – 1910
The Queen Anne style came after many Victorian styles and it is not uncommon to see elements of preceding styles in one house. Two things make it easy to identify a Queen Anne: plasticity (“in-ness and out-ness”) and a continuous gable roof that is expressed at the street. Some houses that began as Italianate or Stick became Queen Anne after a remodel, and there are also some that are all three styles at once. The Victorians dreaded the vacant surface, everything was decorated. Characteristics include multi-textured facade; steeply pitched roof with gable front; conical, corner tower; cutaway bay windows; bands of ornament; and stained glass
More Photos 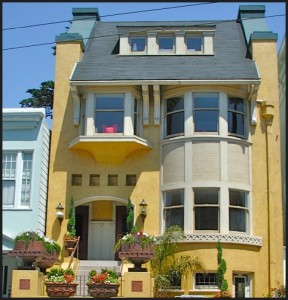 Arts & Crafts: 1890 – 1910
Inspired by John Ruskin and William Morris, the Arts & Crafts movement started in England in the 1860s and started to influence American architecture around 1890. The movement advocated the use of locally sourced natural materials, pride in craftsmanship, and emulation of medieval design. Common characteristics include doorways and windows dressed with stone and brick; projecting eaves; intricate joinery; leaded-glass windows and square chimneys; Gothic ornaments and Tudor half-timbering
More Photos 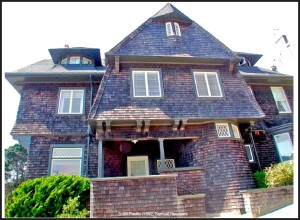 Shingle: 1880 – 1910
Ubiquitous shingle cladding is the defining feature of the Shingle Style. These houses vary widely in composition and historical affiliation, but are still readily identifiable as Shingle style. They minimized decorative elements due to the influence of the Arts and Crafts Style and aimed for informality and rusticity. These homes are a reaction to the design excesses of the Victorian period. San Francisco has many excellent examples of the Shingle style by some the best architects of that time: Bernard Maybeck, Ernest Coxhead, Julia Morgan, Willis Polk.
More Photos 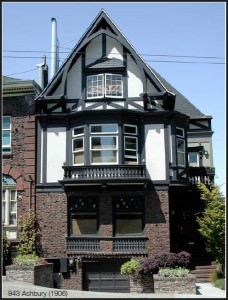 Tudor Revival: 1890 – 1940
Evocative of country homes from medieval England, Tudor Revival houses stand out in the urban context of San Francisco. This style is based on the principles of the Arts and Crafts movement, which advocated a return to medieval building types and design. Characteristics include steeply pitched roof; decorative half-timbering; prominent cross-gables; mix of brick or stone with stucco or wood; and grouped, leaded windows with small panes.
Another Example of Tudor Revival 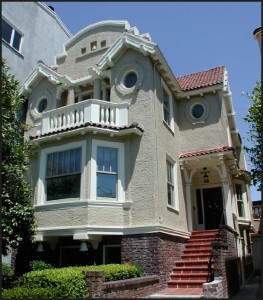 Mission Revival: 1890 – 1920
All you need to do to identify a building in this style is look up. They always have a Mission-shaped parapet or window dormer, from which the name of the style derives. Although the Mission Revival style began around 1890, it did not become common until the start of the Edwardian period. San Francisco is no exception to the rule. Most of the Mission Revival homes and buildings were built after 1901.
More Examples 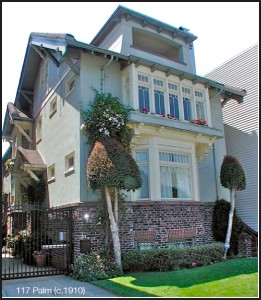 Edwardian Craftsman: 1900 – 1930
In 1901, Gustav Stickley started a magazine called The Craftsman, for which the style is named. The magazine and some pioneering works by the Greene brothers quickly spread the style around the nation. Both Stickley and the Greene brothers were heavily influenced by the English Arts & Crafts movement. Craftsman homes tend to emphasize the horizontal, as in the bands of windows on the facades of these SF houses. Other characteristics include the use of native, natural construction materials; projecting eaves and exposed rafter ends; and casement windows, often with art glass.
Another Example 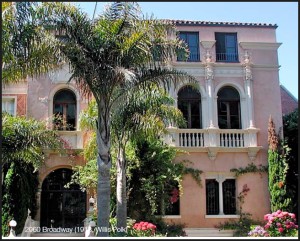 Spanish Eclectic & Revival
Spanish Revival homes look like they belong in Spain, while Spanish Colonial buildings are less refined and look like they belong in a Spanish colony. These homes freely mix elements of Spanish Revival, Spanish Colonial, and Mission Revival. Mediterranean Revival is another freely-mixed style that was popular with San Francisco builders. Thousands of Spanish Eclectic and Mediterranean Revival homes were built in the Marina District and Sunset. Characteristics include a low-pitched roof with little or no overhang; red roof tile; arches over front door and most prominent window; stucco walls; and the large bow front window over a garage.
Another Example

This link goes to architect James Dixon’s complete overview, which was the basis for this article. It features short videos on each of the different Victorian and Edwardian styles mentioned above. Also included is a link to his overview of subsequent styles of San Francisco architecture:

And for those who find San Francisco history as interesting as we do, here are two other websites we’ve discovered filled with fascinating stories and photographs: