There is so much drama in the San Francisco homes market right now that it is difficult to decide which statistics to present in our current newsletter. The supply and demand situation – huge buyer demand and extremely low inventory of homes available to purchase – has created the most ferociously competitive environment for buyers, and the best environment for sellers, in many years. This has been building since the market began turning in 2011, made a quantum jump in early 2012, and is now showing up in big increases in sales prices. Though certain neighborhoods spearheaded the recovery and are currently showing the most dramatic changes in values, pretty much all the city’s neighborhoods are now experiencing a similar supply and demand dynamic.

Closed sales data reflects the market heat 4 to 10 weeks prior, when the new listings arrived on the market and accepted offers were actually negotiated. Thus the April/May spike in values mostly reflects the market in February, March and early April. If anything, the market has only become hotter since then. In past years, the market has usually slowed down during the summer months – we will see if that occurs in 2012, or whether the current trend continues.

Median and average sales prices are calculated in different ways, and each has its advantages and weaknesses as a statistical measure. Any statistic is a generalized, market-condition snapshot taken from a specific angle on the data. Ideally, different statistics should all point to the same conclusion regarding market trends, which is what we’re seeing below. 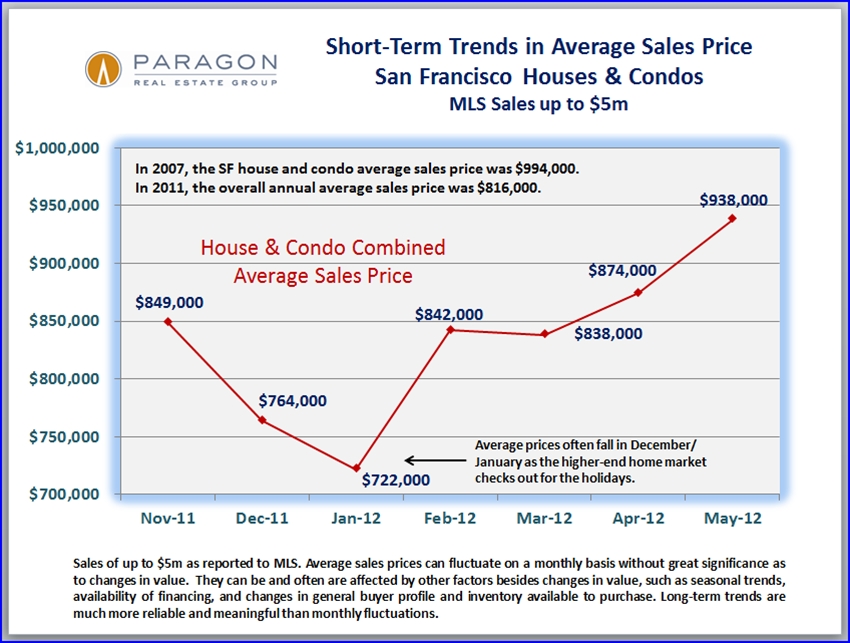 By some measures, property values, at least in April and May – which is a very short statistical period of time – are rapidly approaching peak values in 2007/early 2008. In the next couple quarters, it will be seen if this is simply a dramatic fluctuation or an initial indication of a sea change in market prices. Based upon what we are seeing in the statistics and on the street, we lean toward the second view. 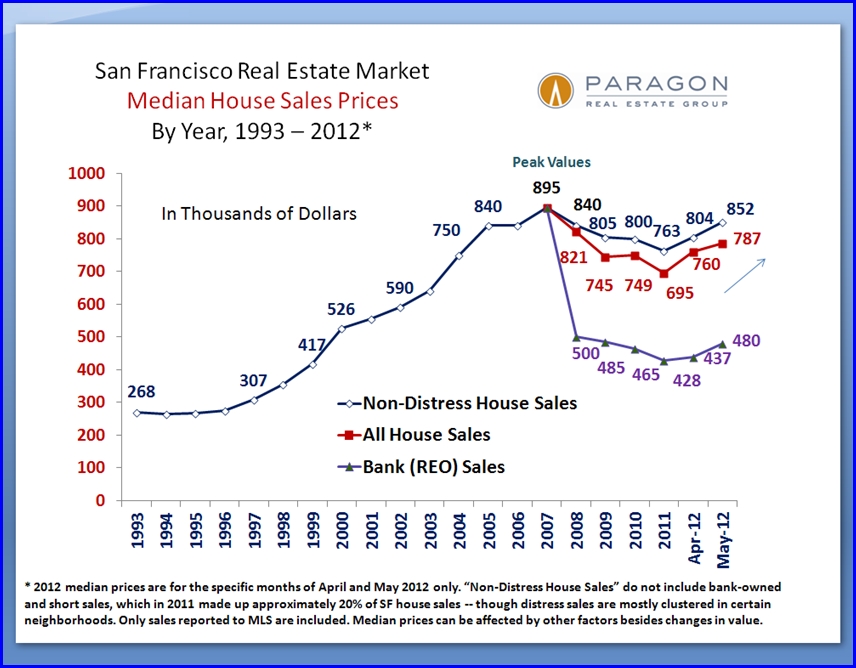 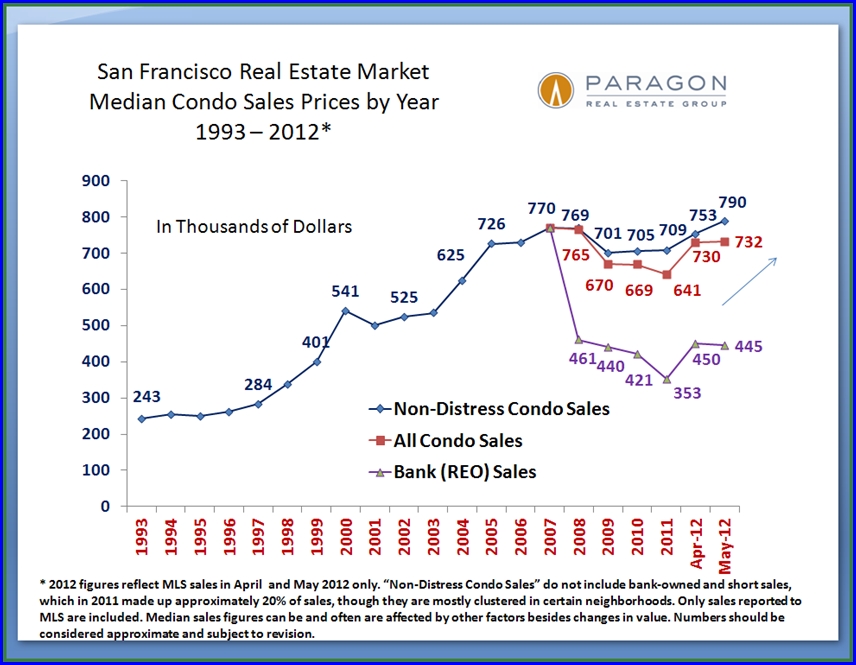 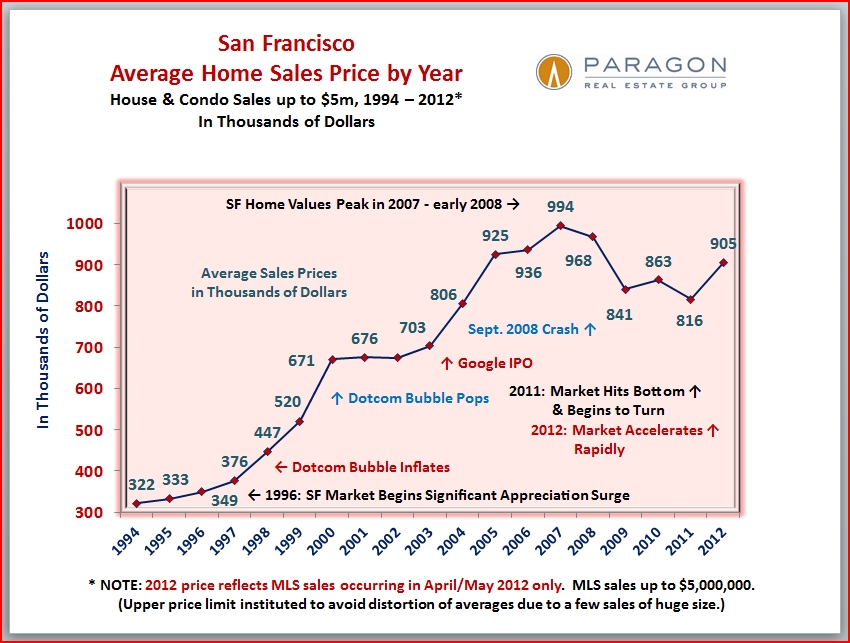 Some neighborhoods, such as the greater Noe Valley area, the greater South Beach/SoMa area and the older, prestige northern neighborhoods such as Pacific Heights and Russian Hill, have been at the leading edge of the market recovery. Other areas, such as many neighborhoods in the southern districts of the city, are a step behind and price increases have not yet shown up as dramatically in the statistics. But we believe they will very soon: the markets there have become very hot as well. 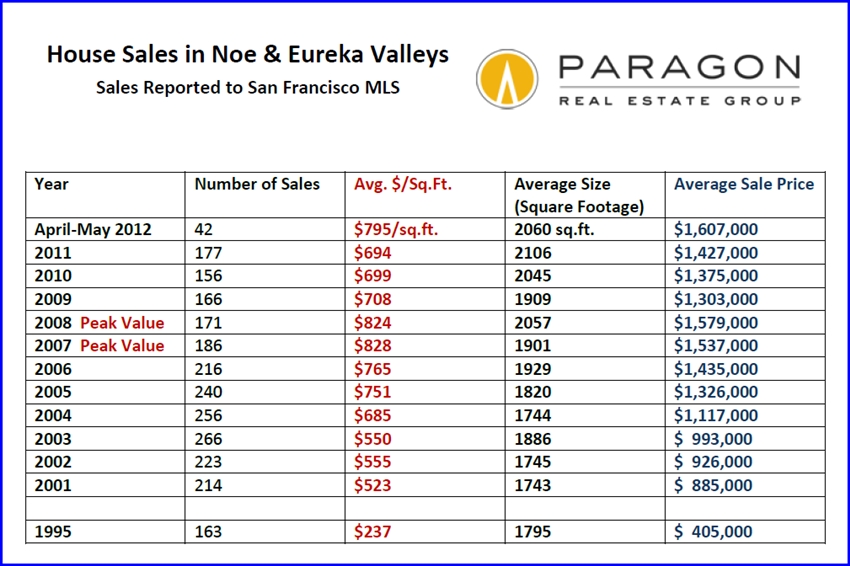 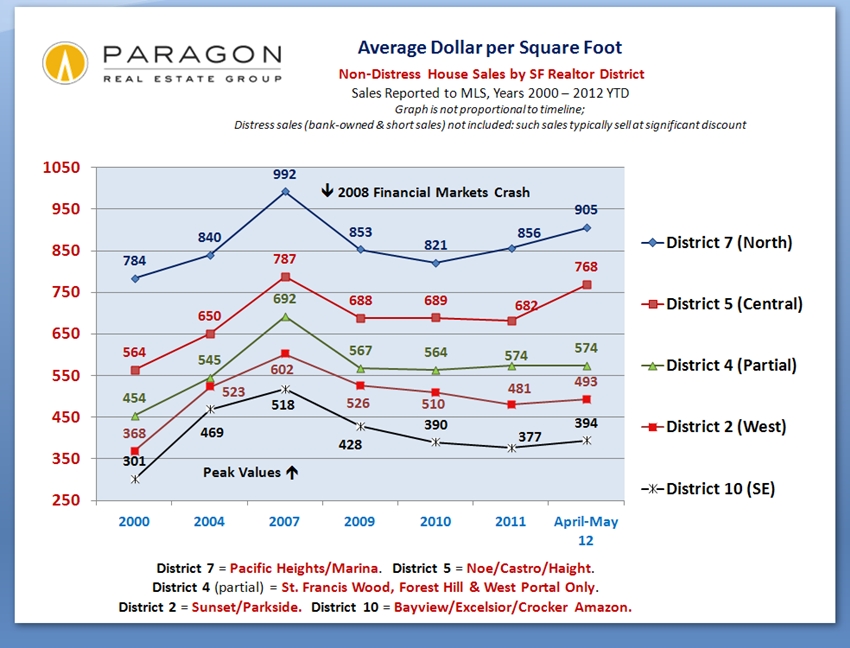 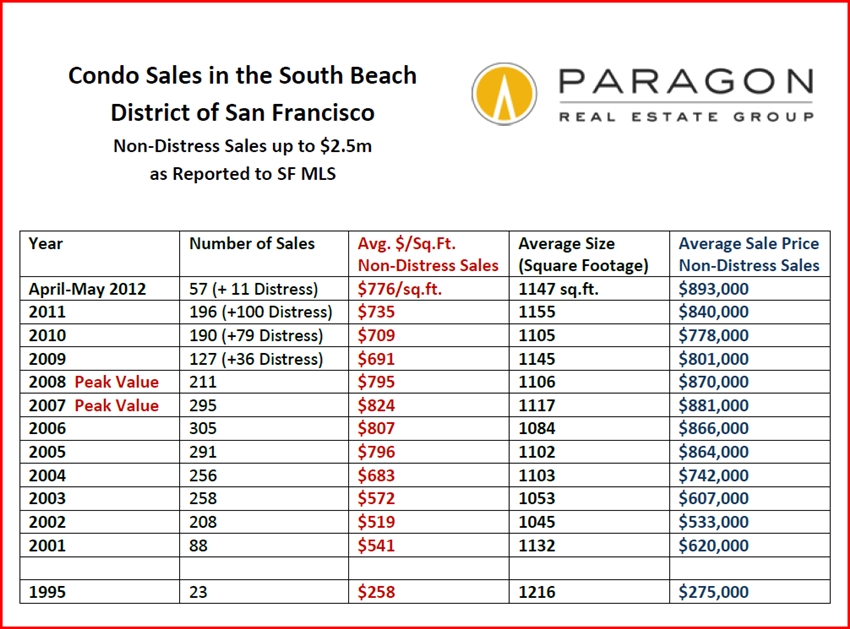 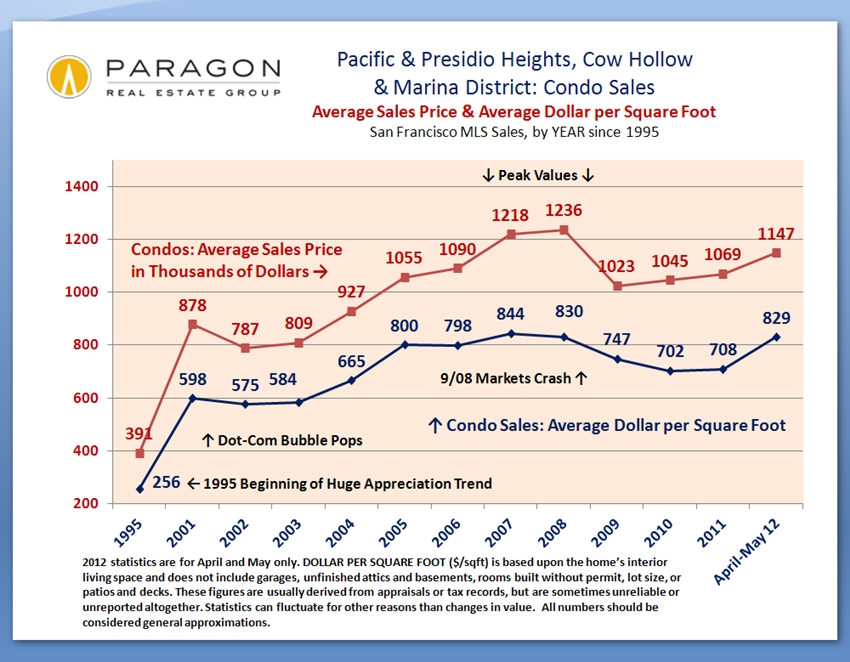 Distressed home listings in San Francisco are rapidly declining by units and as a percentage of the overall market, and as home values and home equity increase, this trend will continue. Since distressed home sales have a negative effect on values, this dwindling will continue to strengthen the market. 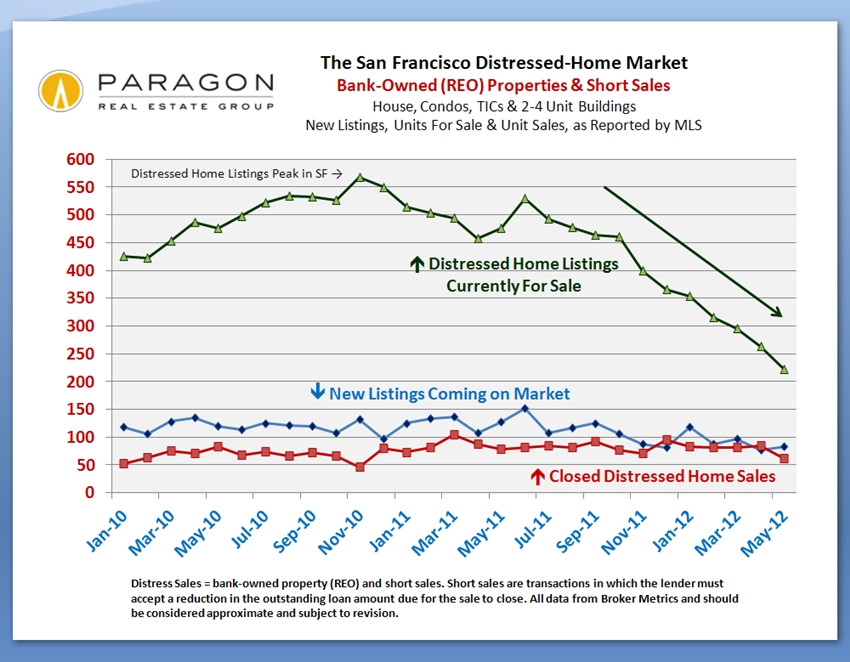 The New-Homes Market in San Francisco

Another important dynamic is the crash in new-home construction 5 years ago and the resultant reduction in new homes (mostly new condos) now available to purchase. As these units are highly sought after, this adds to the crunch in supply and the upward pressure on prices. As the city’s economy and housing market has recovered, builders are jumping back into the market in a big way, but there is a significant lag time between the decision to build and the acquiring of permits and having new condos ready to sell to eager buyers. 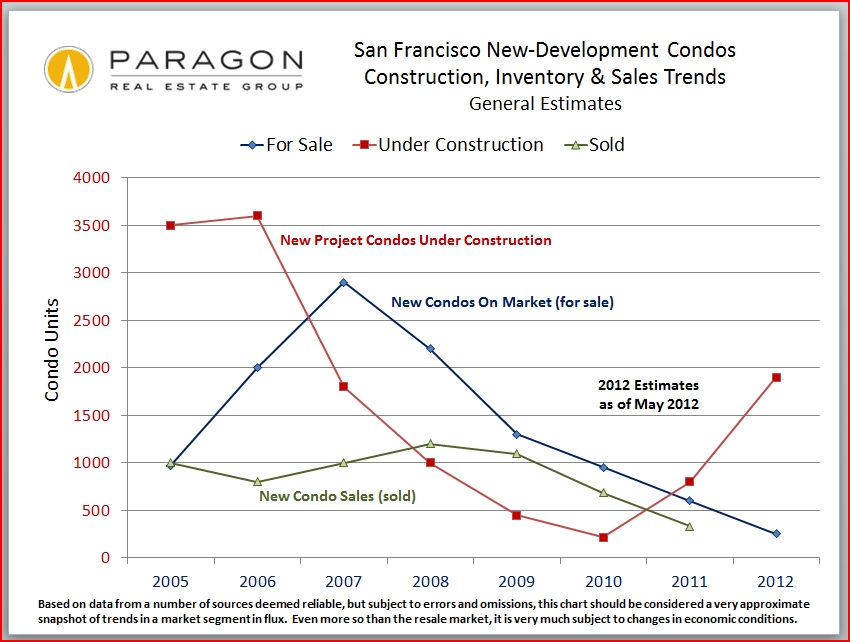 Units for sale and Months Supply of Inventory: Probably at their lowest in decades. 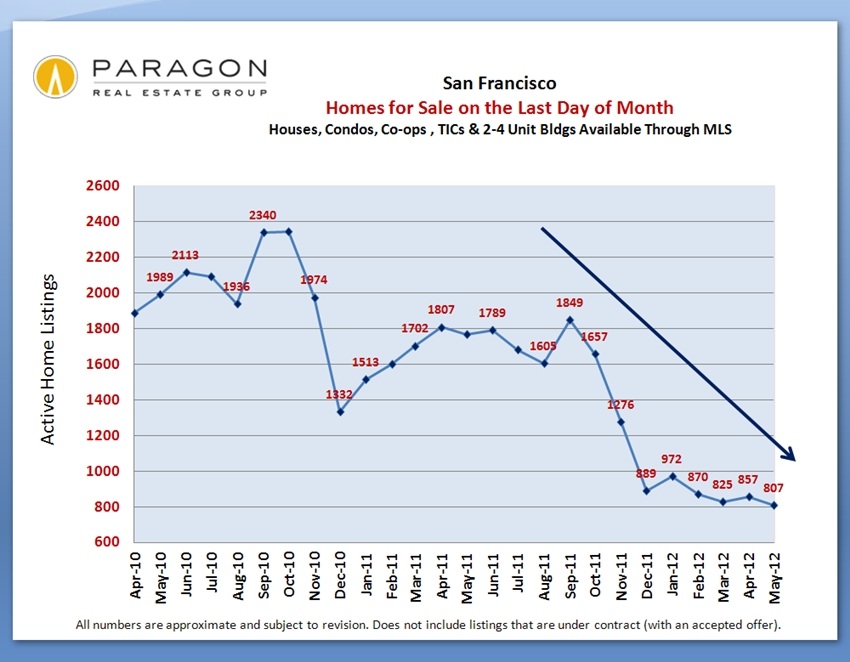 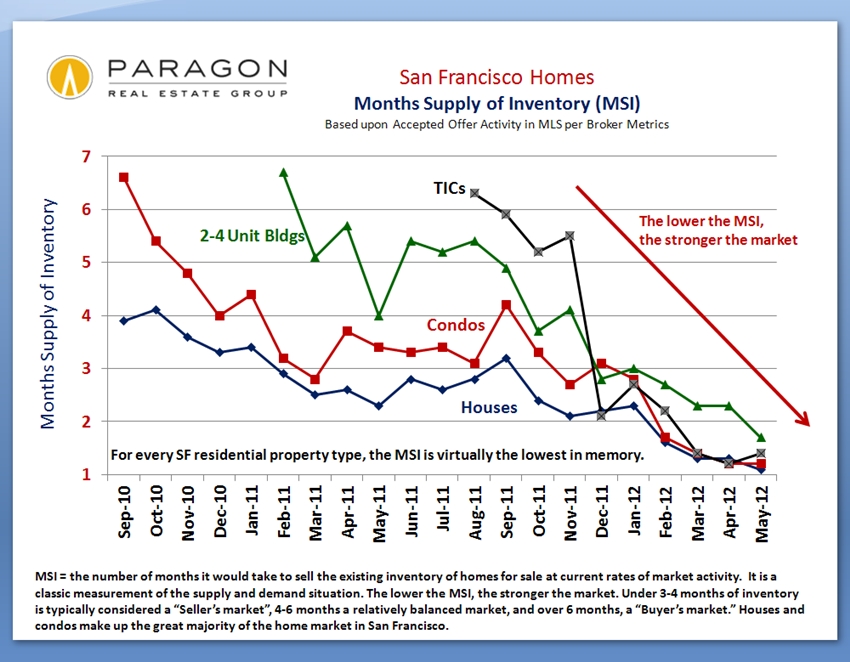 In many ways, this is the single clearest statistic regarding what’s going on in the market. Average days on market have also plunged in May. 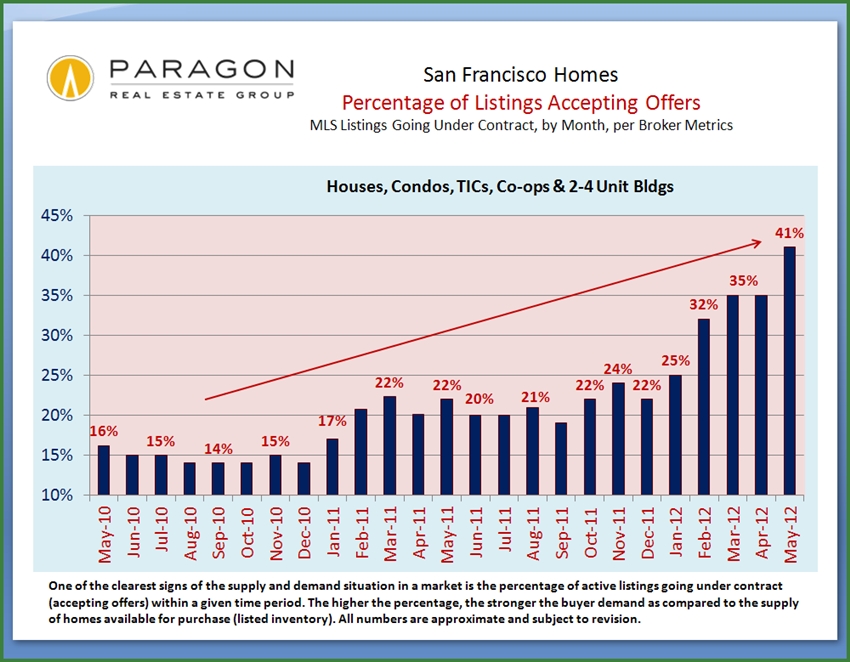 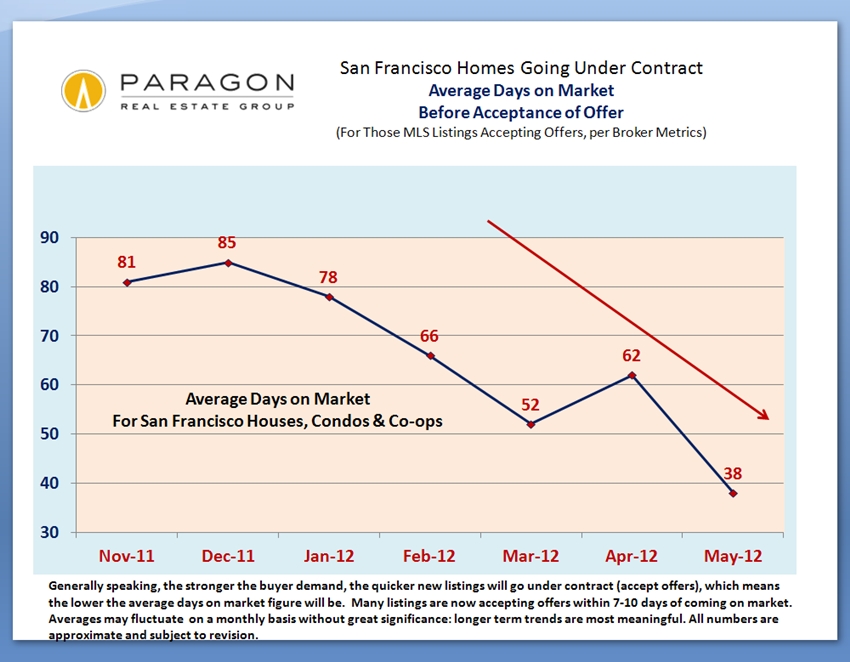 Interest rates just hit another historic low. Someone buying the same priced home now as in 2006-2007 would have a monthly mortgage payment approximately 25% lower. The Rent vs. Buy equation in the city has changed dramatically as interest rates have dropped and apartment rents have soared. 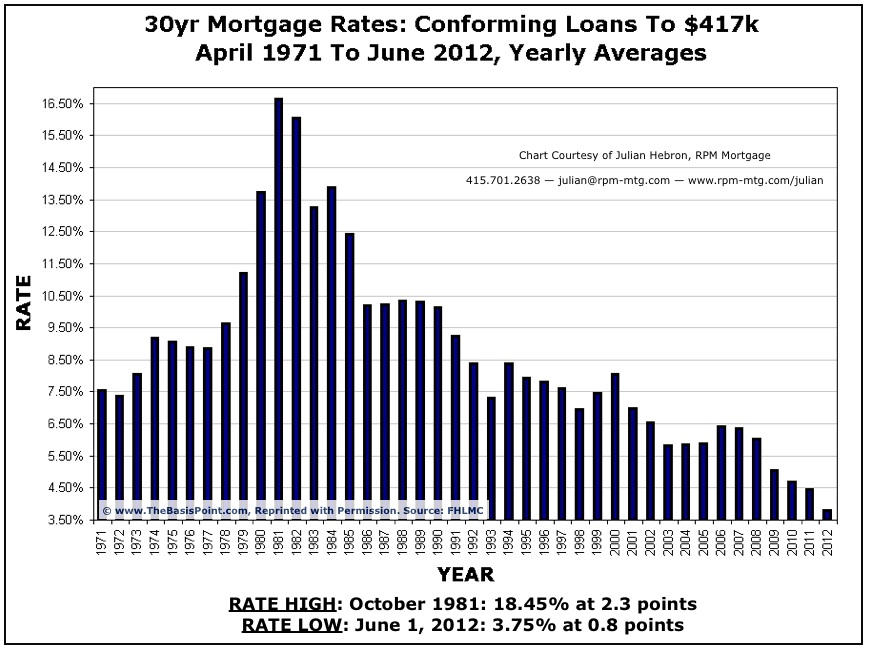