More condos sell in San Francisco’s South of Market (SoMa), South Beach, Yerba Buena and Mission Bay neighborhoods than anyplace else in the city: This is where by far the greatest number of new condos has been built in the last 20 years. The market here heated up very rapidly in 2012, especially as the number of brand new condos on the market has dwindled (contributing to the severe inventory crunch). This area is one of the world centers for high-tech and bio-tech businesses and homebuyers, and the ferocious demand competing for the very limited inventory have caused prices to jump dramatically.

Luxury condos here, in high prestige buildings, typically with spectacular views, sell for among the highest dollar per square foot values in the city. The largest sale reported to MLS in 2012 was $7,850,000 for a unit at the Millennium. 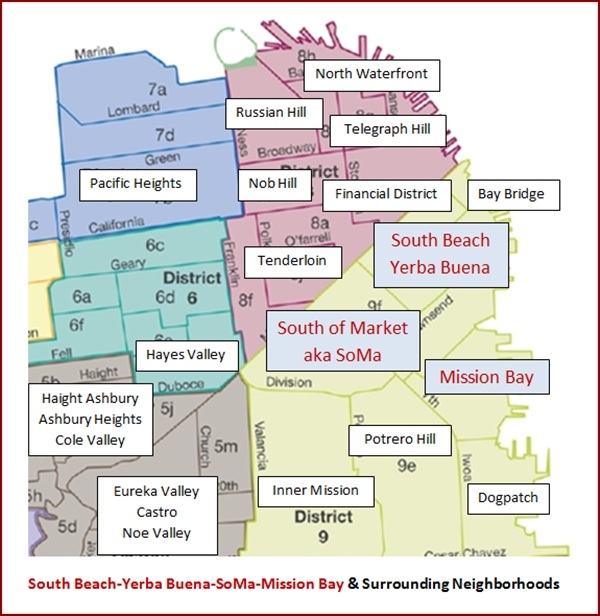 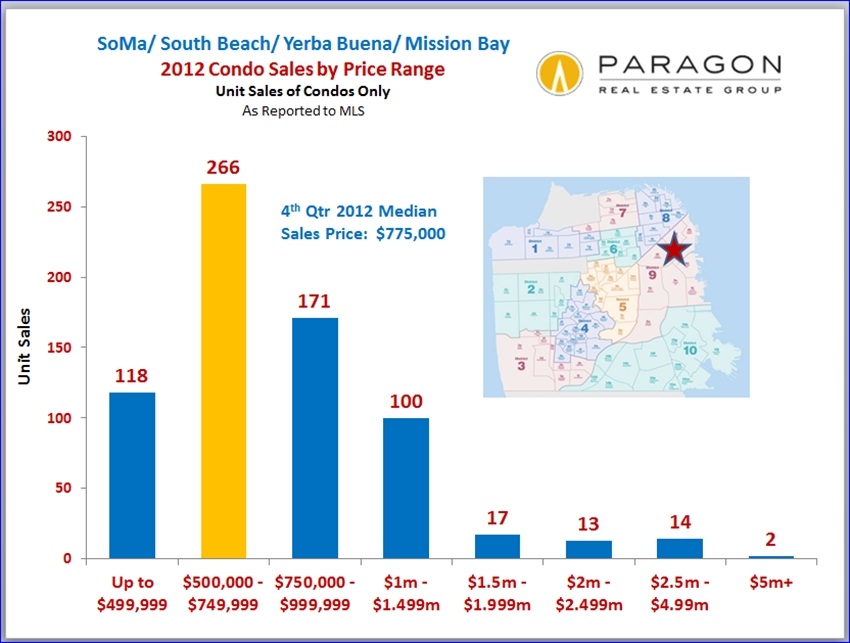 The following charts track average sales price and average dollar per square foot for non-distressed condo sales by year since 1995, specifically for the South Beach/Yerba Buena and SoMa neighborhoods. Remember that average sales price is different from median sales price (which is used more often), but is just another way to look at long-term market trends.

Here, we’ve limited the analyses to sales under $1,800,000: though this area has a large luxury component, the very high-end sales generally distort the averages for the vast majority of sales. 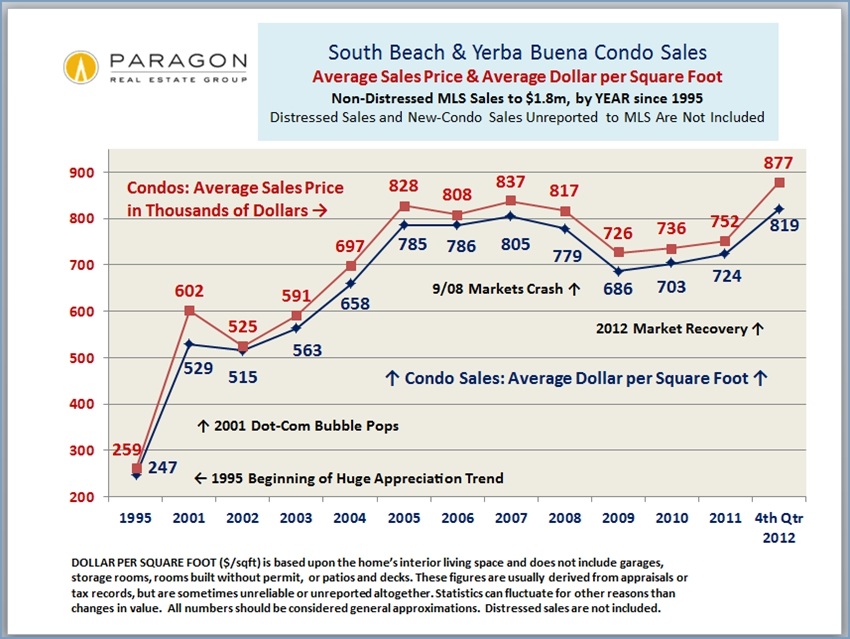 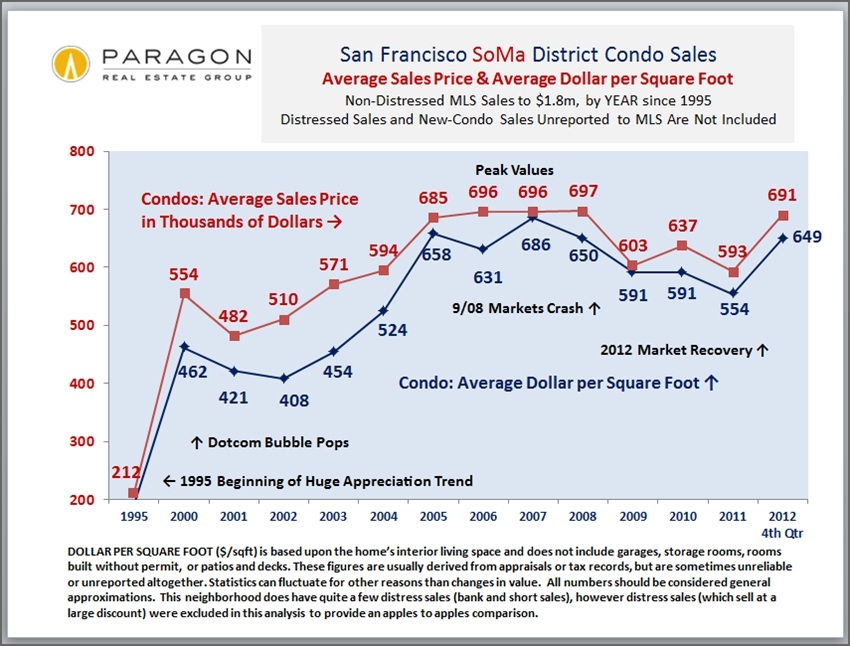 As the market gets hotter, the percentage of listings selling for over asking price increases. 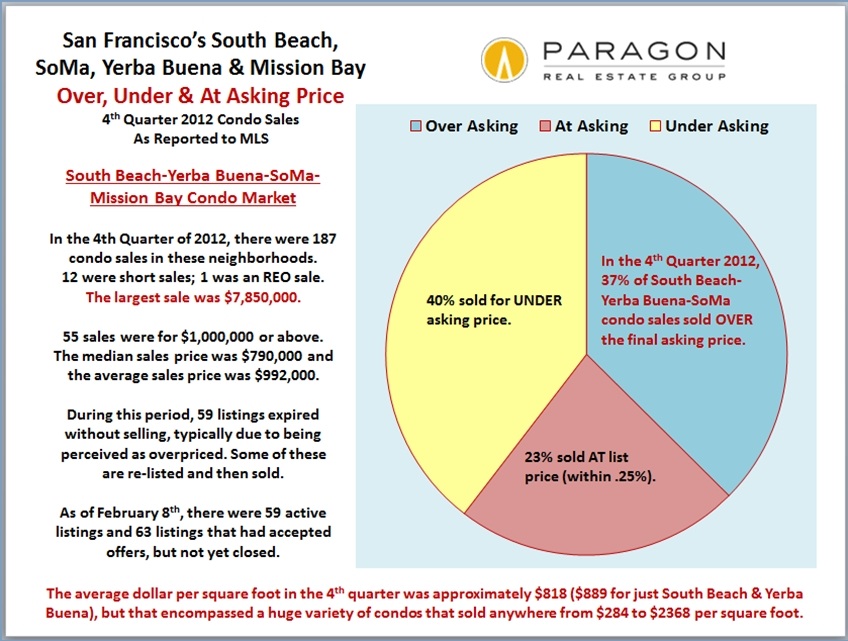 A comparison of Median Price trends for 2-BR condos in 5 of the city’s neighborhoods. All 5 have been showing median price appreciation, but none more so than the South Beach and Yerba Buena neighborhoods. 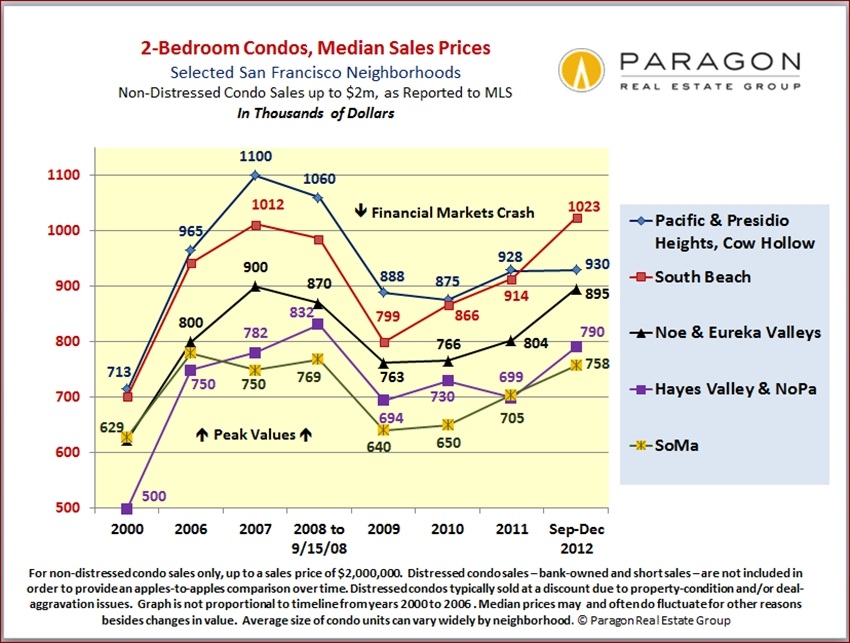 Very strong unit sales numbers in recent quarters and they would have been significantly higher if there were more listings available to buy. Distressed condo sales are rapidly declining as the market recovery has gained momentum. 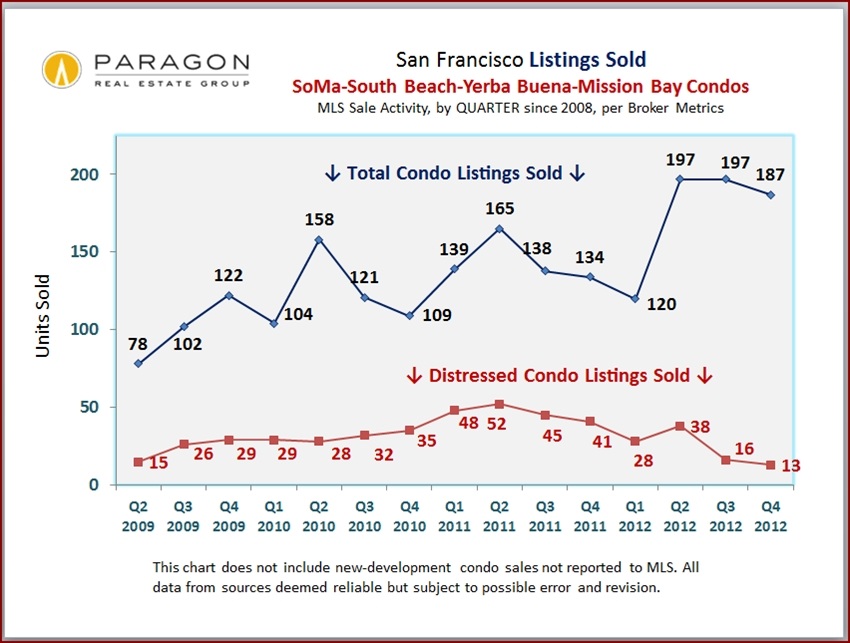 An excellent statistic for measuring buyer demand against supply of inventory. The percentage is now at the highest point in memory. 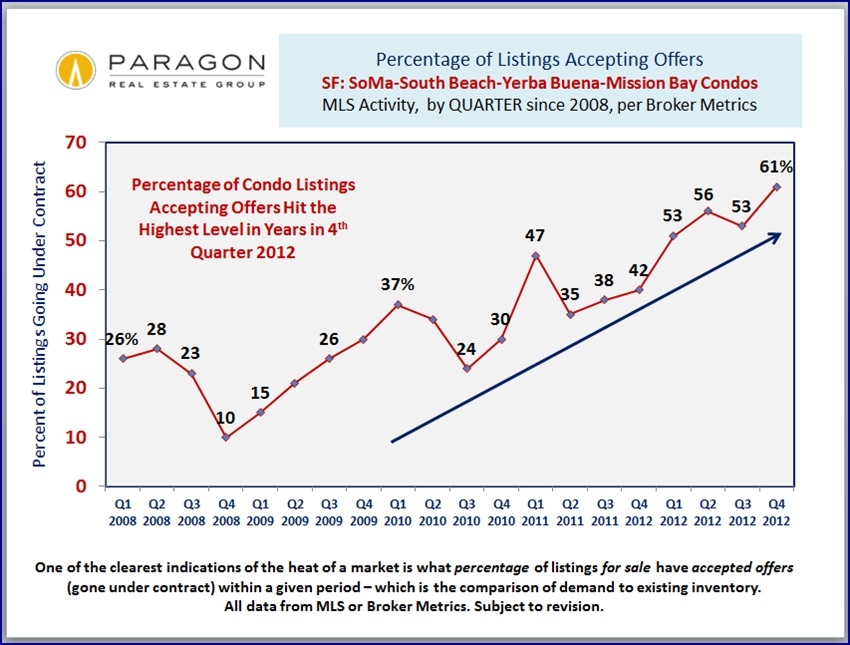 The inventory of condos listed for sale through MLS is far below that of previous years and is seriously inadequate to meet market demand. 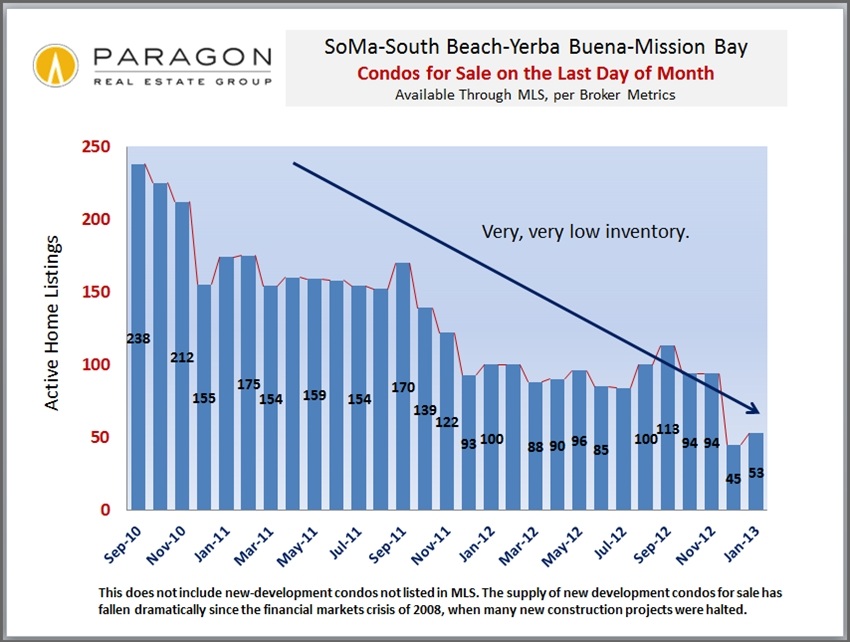 The vast majority of new-condo construction over the past 15 years has been in this greater area: it’s been estimated that over 10,000 were built here in the first 10 years of the century. The 2008 financial crisis caused new condo construction to crash in SF, which led to large declines in new-condo listings and sales. Now, new construction is recovering in a big way — many big new projects are planned by some very well-known developers — but it will probably take about 2 years, more or less, before we see a large quantity of newly built condos coming on the market. 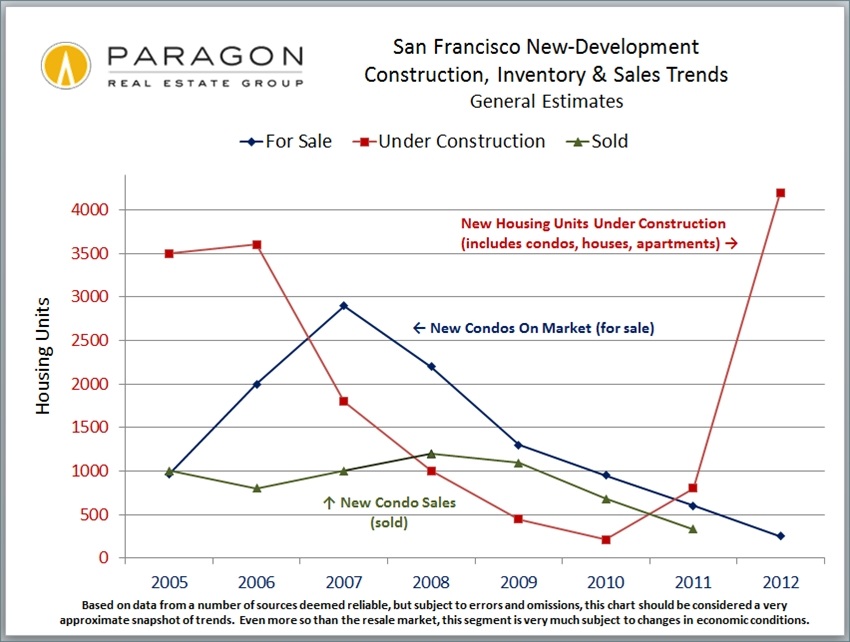 The lower the MSI, the stronger the demand as compared to the supply of homes for sale. MSI readings this low — below 2 months – is considered to be indicative of a strong “Seller’s Market.” 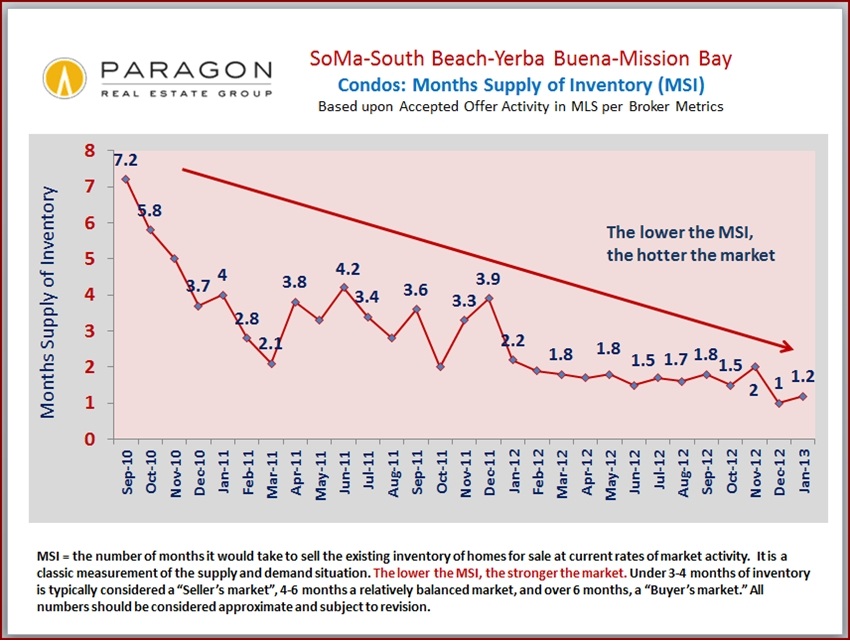 The number of condos selling for $1m and above is at its highest point in years: Sales increased in the 4th quarter even as inventory fell. Demand for higher-end condos in the best buildings is quite competitive now. 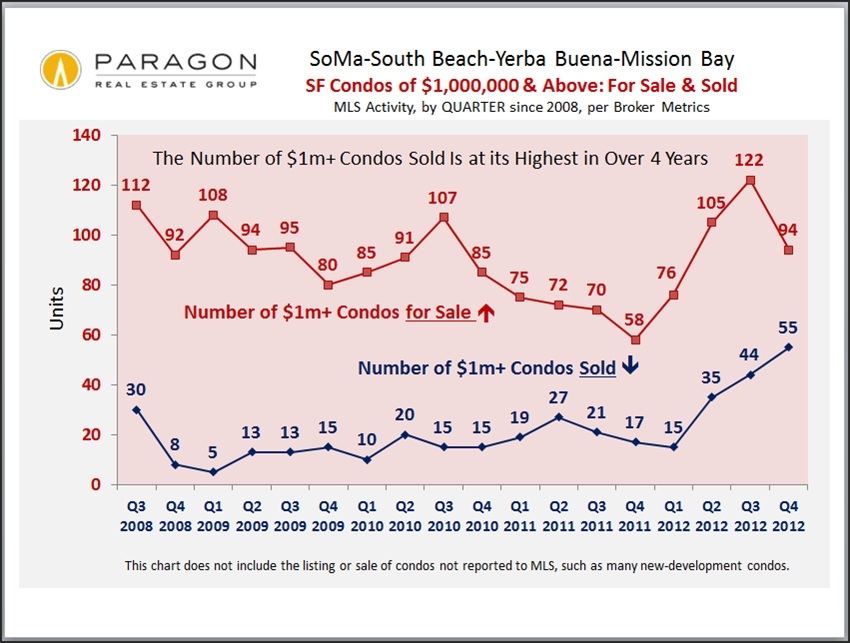 Because so many large developments were built here in the last 15 years, this area had more distressed condo sales (bank-owned property sales and short sales) than any other area of the city. However, the number of distressed listings and sales has been rapidly declining with the market turnaround and looks to disappear completely in the near future. 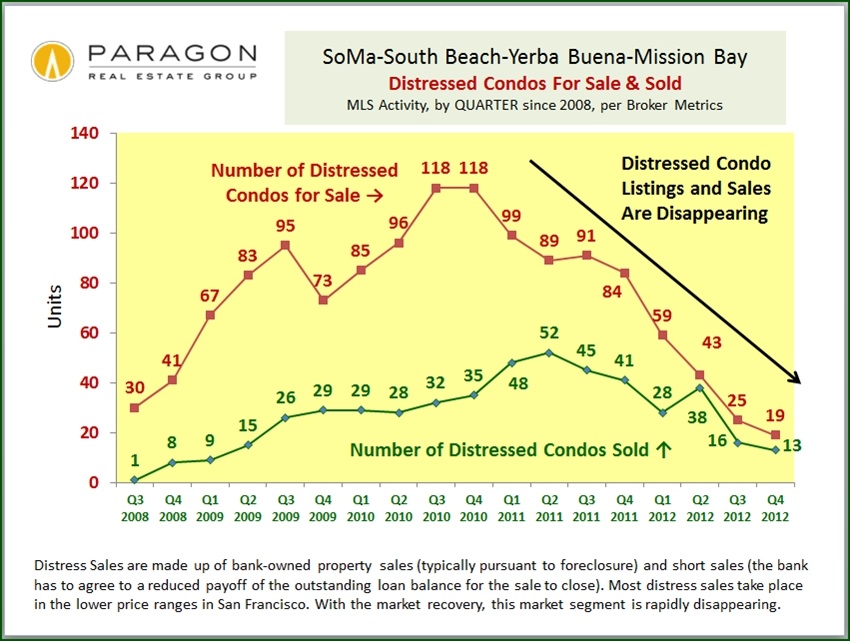 ******************************
MEDIAN SALES PRICE is that price at which half the sales occur for more and half for less. It can be, and often is, affected by other factors besides changes in market values, such as short-term or seasonal changes in inventory or buying trends. Though often quoted in the media as such, the median sales price is NOT like the price for a share of stock, i.e. a definitive reflection of value and changes in value, and monthly fluctuations are generally meaningless. If market values are truly changing, the median price will consistently rise or sink over a longer term than just 2 or 3 months, and also be supported by other supply and demand statistical trends.

AVERAGE SALES PRICE is calculated by adding up all the sales prices and dividing by the number of sales. It is different from median sales price, but like medians, averages can be affected by other factors besides changes in value. For example, averages may be distorted by a few sales that are abnormally high or low, especially when the number of sales is low.

DAYS ON MARKET (DOM) are the number of days between a listing going on market and accepting an offer. The lower the average days on market figure, typically the stronger the buyer demand and the hotter the market.

MONTHS SUPPLY OF INVENTORY (MSI) reflects the number of months it would take to sell the existing inventory of homes for sale at current market conditions. The lower the MSI, the stronger the demand as compared to the supply and the hotter the market. Typically, below 3-4 months of inventory is considered a “Seller’s market”, 4-6 months a relatively balanced market, and 7 months and above, a “Buyer’s market.”

DOLLAR PER SQUARE FOOT ($/sqft) is based upon the home’s interior living space and does not include garages, unfinished attics and basements, rooms built without permit, lot size, or patios and decks — though all these can still add value to a home. These figures are usually derived from appraisals or tax records, but are sometimes unreliable or unreported altogether. All things being equal, a house will sell for a higher dollar per square foot than a condo (due to land value), a condo higher than a TIC (quality of title), and a TIC higher than a multi-unit building (quality of use). Everything being equal, a smaller home will sell for a higher $/sqft than a larger one. (However, things are rarely equal in real estate.) There are often surprisingly wide variations of value within neighborhoods and averages may be distorted by one or two sales substantially higher or lower than the norm, especially when the total number of sales is small. Location, condition, amenities, parking, views, lot size & outdoor space all affect $/sqft home values. Typically, the highest dollar per square foot figures in San Francisco are achieved by penthouse condos with utterly spectacular views in prestige buildings.